I know a lot of hard workers. In my sport, some are just like me : really hard workers. But I think none of them have sacrificed their personal life as much as I have.

And between us, if there was just one, it would mean only one thing : that I have work to do, that I must do even more.

Because if there is one thing I’ve learnt, it’s the only way to best the others.

If I tell you that I’ve bought a 20 acres « masia » in Spain, near Girona, I’m quite sure you’ll find that super cool. Except that as I’m writing these line, the domain looks like a camp site, the house is under construction and I’m sleeping in a small mobile home next to the construction site.

Here, I employ a friend as a « helper ». He’s part time mechanic, part time something else, but he helps me all day. And believe me, the days are long.

On the menu, no days off, no holidays and, obviously, not much private life. I devote myself to my sport.

So, given the weather is cooperative with me, the menu is as follows :

–  Training mornings and afternoons, every day of the week, even Sundays.

–  Maintenance of the bike, all the mechanical stuff.

Other than the rythm I impose to myself, I must say that freestyle motocross is an expensive sport. I invest a lot of my revenue in all this equipment. I sometimes hear these are all whims, but the best invest in the equipment. And if worst come to worst, and it all stops tomorrow, I will have learnt a job, I could be a mechanic.

All of this, I do in part because I don’t think I’m the most gifted or the most talented. I think that if I didn’t abide by that strict discipline, the others would be much better. When I win, I tell myself it’s because I’ve had more success or I tried a more daring stunt. Never because I’m more talented that the others.

As a result, my relationship with the bike has changed. In the beginning, it was almost a game. It was funny. Then arrived the moment when I became more demanding of myself. I had to put on a nice show, make people. So I imposed that way of life upon myself. It was almost an obsession. It never left me.

Neither did the anguish that comes with it.With stress, I close up. I really tried to keep my anxiety to myself, but at a certain point, it’s not that easy.

After a while, solitude kicked in, but I think I wanted it.

My sport and my career anguish me. Sometimes, it’s short lived, because of the competitions to come. Sometimes, it lasts longer, when I think about my future. Professionally, you tell yourself it’s going to end at some point. You’re afraid of getting injured also. You ask yourself what’s going to become of you, how are you going to cope financially. And I get anxious about my performance. I get anxious about not being good.

And the sense of pleasure in all of this ? It is present, mais essentially in the results of the work. I take pleasure in what I accomplish because I am proud of what I do. There is also pleasure in winning, in doing a new stunt, in overcoming my fear. Like starting a day by giving myself a challenge and finishing the day by overcoming it. I’m loving that.

But anxiety and stress rarely go away. Because risk goes with training. That doesn’t always make me very nice. I’m often on the edge, nervous.

It must be said I never liked to lose. When I was little, board games with the family wasn’t really my thing. I could stand being told I was a bad loser. It was unbearable.

I understood a lot of things working with my psychotherapist, Isabelle Inschauspé, we managed to put words on problems and then work on them and overcome them, it got much easier. I knew my weaknesses. From then on a discipline set in and for sure when I’m on the bike, I put myself in a condition where no one can overcome me.

It would have driven me, upon retirement, to tell myself things I’ve heard from some which I don’t understand. The famous “if I had wanted or if I could, I would have gotten there”.

I’m proud to be able to say today that if I have what I have, if I have gotten these opportunities, it’s because of sacrifice.

I wasn’t great in school, but at the same time, given that Charles, my elder brother, was my role model, it’s not difficult to understand why ! My parents tried to motivate me by telling me that in order to drive on the week end, I needed an average grade of 14, but hey knew it was impossible!

I’m not going to tell you how we got out of it because you’l think I’m crazy, either that or my Dad is going to ask me what we were doing with his old 205 and the winches that were attached to it.

It was the beginning of the adventure.

After that, I came out of school and went to work part-time at the factory. That gave me a boost to succeed.

I was around Nantes, I did a little over 6 months in a bicycle factory, in the packaging department. But as soon as I had a little money, I bought parts for the bike. Since I was working 16 hours a day, it left me mornings or afternoons to go to rubbish dumps to look after my bike and the foam container.

We did that every with Charles, relentlessly. Some said I was lucky to do that with my brother. But for me at the time, I was doing that with “some guy”. We teased each other a lot! In such a way that after a while, during competitions, it was all out war.

In hindsight, we must admit that we had unique parents who supported us at the start when we had no money. When we didn’t have the money to rent a digger for 500/1000 euros a week-end, sometimes my Dad made sacrifices so we could do it.

Today, I have the digger at my place, not far from the mobile home. That shows how far I’ve come.

It’s to be believed that sacrifices where worth the while. 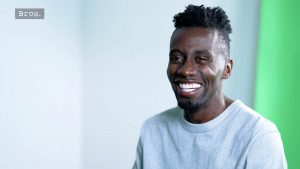 The charo is always intractable and even more so when it comes to his flow. The embodiment of class both on and off the pitch, world champion Blaise Matuidi has honed his style alongside the greatest. To keep up with him, you'd better have some cardio. 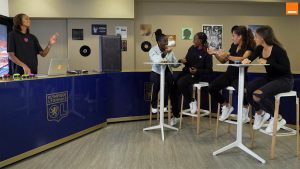 The Lyon players are not used to defeat and it shows. MC Wendie Renard is the atmosphere of the duos Griedge Mbock / Melvine Malard VS Amel Majri / Delphine Cascarino in a fight more bitter than a Champions League match. The world is mean. 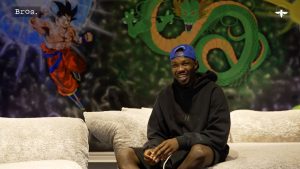 Marcus Thuram the Borussia Mönchengladbach and French Football Federation striker is a destroyer for the opposing defenses but rather a submarine when it comes to tattoos... Secret stories.